​Thomas Jefferson papers at the Library of Congress

The top 5 accomplishments of Thomas Jefferson

​Thomas Jefferson's political career culminated with his election as the nations third president in 1800. Also one of the founding fathers, he served as Secretary of State and Vice President during the first 10 years of the nation. Known for his great forward thinking, Jefferson made the Louisiana purchase, which doubled the size of the United States. Still one of the most popular presidents today, he is often quoted by current politicians of all parties.

Jefferson began his path to national prominence as a lawyer in colonial Virginia. During his law career he encountered many of the issues that would lead the colonies to seek their independence. Jefferson's set of resolutions in response to the British Intolerable Acts laws contributed to the call for independence from British rule.

​In 1775 Jefferson began service as a delegate to the Second Continental Congress. As a part of his service he was a part of the group of 7 delegates who were tasked with writing the Declaration of Independence. The committee all agreed that Jefferson should be the one to actually write the document and he would finish the first draft in 17 days. After a few revisions by like likes of Benjamin Franklin and John Adams, the final draft was presented to Congress on June 28, 1776. On July 4, 1776 the Declaration of Independence was ratified by Congress and the document was signed.

​After his time with the Continental Congress ended, Jefferson returned to Virginia to serve in it's House of Delegates. Jefferson would then be elected as Governor of Virginia and lead the state from 1779-1781. After the Revolutionary War ended he would return to the national stage as a member of the Continental Congress, a roll he would have until becoming Minister to France.

​By 1789 Jefferson's work in France was complete and he returned to the United States. At this time President George Washington asked him to become Secretary of State, a position that he accepted. This office would allow Jefferson to remain a vital part of the government and lead to him being elected vice president in 1796 under John Adams.

The election of 1800 put Jefferson against Aaron Burr, who was also a Democratic-Republican. The election would end in a tie, leaving the Congress to make the final vote as to who would be president. After building enough party support, Jefferson would be elected president on February 17, 1801, with Burr becoming the vice president.

As president, Jefferson would oversee some of the greatest accomplishments of the 19th century. The Louisiana Purchase would be a major part of American growth and set the stage for full western expansion of the United States. As a part of the countries expansion, Jefferson would order the famous Lewis and Clark expedition. By growing the physical space of the country Jefferson strengthened the nation as a whole.

​After a popular first term, Jefferson won re-election in 1804. During his second term he had to deal with rising tension and violence from the British over traded goods. This would lead to the Embargo Act of 1807, which denounced aggression against American shippers. At the end of his second term, Jefferson would do as George Washington did and not seek a third term, thus ending his political career. 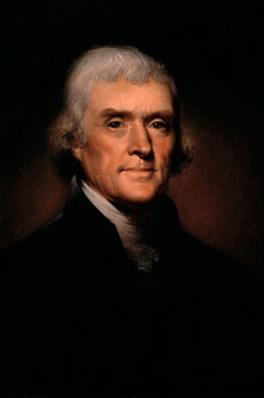