The top 5 things president Ronald Reagan accomplished in his presidency

Ronald Reagan was the 40th president and when elected, the oldest to be elected to the office at age 69. Before entering politics, Reagan was an actor and radio personality. During his time in office he survived an assassination attempt that almost took his life. His work on spreading democracy is credited by many as a reason for the fall of the Berlin wall and the end of communism in Russia.

​Reagan may have had the most unorthodox path to politics in the history of the United States. He began his professional career as a radio broadcaster and then as an actor in films and television. Reagan famously played George Gipp in the film Knute Rockne All American.  His acting career spanned from the 1930's until the mid 1960's when he politics became his main focus.

By the late 1960's Reagan was a key part of the conservative movement in the Republican party. He had endorsed candidates over the years and had spoken out on key party issues. In 1966 he was elected Governor of California and would serve two terms. His presidential aspirations were evident as early as 1968 when he ran as a opposition candidate to Richard Nixon in the republican primary. Reagan would also run unsuccessfully in 1976, losing in the primary to Gerald Ford.

In 1980 Reagan used his experience from past campaigns and started what is known as the Reagan revolution. Running against the highly unpopular Jimmy Carter, Reagan was able to make his case that the country needed a change to conservative leadership. By winning the election in a landslide Reagan was able to gain political momentum that would carry him through the decade.

One of Reagan's first priorities was to fix the nations economy, which was suffering from inflation and high unemployment rates. The term 'Reaganomics' would be used in reference the set of initiatives that Reagan would push to help improve the economy and create jobs. By the end of his first term the country had seen an improvement in both areas.

Reagan's first term did have it's struggles and lows. On March 30th, 1981 Reagan would be shot in an assassination attempt and narrowly survive. This event actually helped Reagan gain support from the American people and would help guide him with a 'new purpose' for the rest of his life. In his first term Reagan would also have to deal with growing Soviet aggression and the peak of the Cold War. He would spend the rest of his presidency trying to end the decades old silent battle.

In 1984 Reagan would once again win a landslide election. This time against Walter Mondale, who served as vice president for Jimmy Carter. This strong re-election showing gave Reagan enough political capital for the rest of his time in office. During his second term he would concentrate on the economy, the war on drugs and ending communism in Russia. Reagan would leave office with a high approval rating and his vice president George H.W. Bush would win the presidency based on many of the accomplishments of his administration.​​​​ 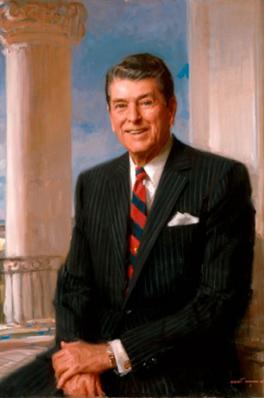