​Richard Nixon was the 37th president and only one to resign while in office. He was known for opening up relations with China and other diplomatic foreign policy actions. During his time in office he focused on battling inflation and energizing the economy. In 1970 Nixon formed the environmental protection agency and supported the clean air act.

Nixon was raised in California by conservative Quaker parents and only had modest means. His upbringing led him to focus on his studies and he excelled at Whittier College and the Duke Law School. He would also go on to serve in the Navy during WWII.

After the war Nixon would return to Whittier, CA and began his political career. In 1946 he would successfully run for congress. Wasting no time, Nixon would get involved in many major pieces of legislation. This would propel Nixon to become a rising star in the Republican Party. His stock would rise even higher after becoming one of the states senators in 1950.

In 1952 republican party heads helped Dwight Eisenhower select Nixon as his running mate. Nixon’s strong conservatism, youth and votes that he could deliver from California made his selection a popular one. Eisenhower would win the election handily and Nixon would assume the role of vice president in 1953.

As vice president, Nixon took on a bigger role than most of his predecessors. In 1955 he would take on an even bigger role when Eisenhower suffered a heart attack that would sideline him for six weeks. The experience that he gained as vice president seemed to set him up well for a run of his own in 1960.

The election of 1960 was one of the closest in the history of the United States. Nixon would face democrat John F. Kennedy of Massachusetts and take part in some of the most historic debates in presidential history. In the end, Kennedy would defeat Nixon and win the presidency. This would be the first setback of Nixon’s political career.

Soon after leaving office in 1961, Nixon was lured back into politics. He was persuaded by party heads to run for Governor of California in 1962. Many viewed this run as just a temporary position before he would run for President again. That skepticism led to his defeat and public embarrassment. He would famously have a farewell press conference that seemed to end his political career.

In 1968 Nixon’s fortune would change. The nation was in the middle of a very unpopular war and had a president in Lyndon Johnson who was not running for re-election. His conservative credentials and name recognition helped him gain momentum for another run. This time he would be successful against democrat Hubert Humphrey

As president, Nixon vowed to bring the divided nation together and end the war in Vietnam. He would also build on relationships that he had as vice president in the 1950’s. His groundbreaking visit to China set the stage for future trade and relationships with the country.

In 1972 Nixon would run for re-election against democrat George McGovern. With his policies now in effect and the war progressing to an end, Nixon was a favorite through the campaign. He would go on to win in a landslide, taking over 60% of the vote and winning the electoral college 520-17.

Nixon’s win would turn sour very quickly in his second term as scandal took over the country. Information would come out that linked the Nixon administration to a break in of the democratic party headquarters at the Watergate complex in Washington, DC. It was also alleged that Nixon himself knew of the plan to spy on political opponents. To cause even more scandal, Nixon’s vice president Spiro Agnew would have to resign his position because of bribery, tax evasion and money laundering  charges stemming from his time as Governor of Maryland. 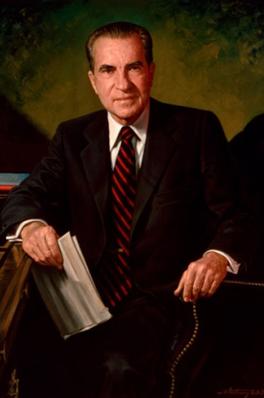