The home of John Tyler

​John Tyler was the tenth president and took office after the death of William Henry Harrison. Having become the first president to assume office after a death, Tyler took charge during a time of constitutional uncertainty. During his time in office he often clashed with the Whig party who had control of the House of Representatives.

John Tyler is mostly known due to the fact that he was never actually ‘elected’ to serve in the presidential office. He took charge for the responsibilities of President when his predecessor President William Henry Harrison died just 32 days into presidency. John Tyler became the 10th U.S President who went on to serve the whole 4 year term, without a vice-president by his side.

John Tyler’s father was the governor of Virginia, and later became a judge. John liked to spend time with his father, with whom he became even closer after his mother died. His father John Tyler Sr. was a colleague of Thomas Jefferson, who was the third president of the United States.

As a young boy, John Tyler was a feeble looking, slender boy who grew up on greenway plantation in Virginia, an estate owned by his father. He studied and practiced Law after 1809.

He Joined politics by serving the Virginia House of Delegates. He was a member of the Democratic Party, but later joined the Whig party due to developing some differences over the policies of Andrew Jackson.

Personal Life Before Becoming US President:

Once a member of Whig party, he contended as candidate for the seat of vice president, which he won and William Henry Harrison became the president.

After he became president, John Tyler, on most occasions, went against the policies of the Whig party. Due to this he was dismissed from the part, but he resumed office.

Just before his retirement, he supervised the annexation of Texas from Mexico in 1845.

He solved the Canadian border dispute by signing the Webstor-Ashburton treaty, that solved the problem with the Canadian colonies populated near the US – Canada, Maines Border.

John Tyler’s health constantly deteriorated during his years in office. In his last year he suffered from colds and finally died from, what many believe to be, a stroke. 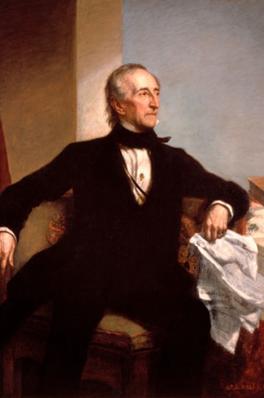