John Quincy Adams was the sixth president of the United States and son of president John Adams. Before he was president, Adams served as Secretary of State for the James Monroe administration. Known for his great political skills, Adams focused much of his presidency on domestic issues.

Adams was exposed to politics at an early age through his father, who would later become president. He gained a first hand perspective of the American Revolution and it would shape his entire life. During this period Adams would accompany his father on diplomatic trips to France and other countries to help build alliances.

In the early years of his career, Adams was able to make a name for himself in the administration of president George Washington. As minister to the Netherlands and Portugal he would handle negotiations much like his father did during his youth. His work gained wide praise and he would become a vital part of U.S. foreign relations for the rest of his life.

​By 1817 Adams had become such a name in foreign affairs that he was named Secretary of State for the administration of president James Monroe. He would hold this position until 1825 when he would run for president. During his time in this role he played a vital part in negotiations over the Oregon territory and helped author what would become known as the Monroe Doctrine.

​In 1824 Adams would run for president against John C. Calhoun, William Crawford, Henry Clay and Andrew Jackson. This election was one of the closest in history and is still debated to this day. Adams would actually receive fewer popular and electoral votes than Jackson, but the election would be decided by the House of Representatives due to neither candidate receiving a majority. Ultimately Adams would be elected by congress after he brokered a deal for Clay to become Secretary of State.

As president, Adams would begin by focusing on domestic issues. It was his thought that to improve the standing of the country around the world it would need to be strong internally. He would accomplish this by supporting building of roads and support of a banking system to grow the economy. Adams would spend most of his presidency on these issues as it was a relatively peaceful time around the world.

In 1828 Adams would lose his re-election bid to Andrew Jackson. This was mainly due to Jackson having more political and regional support.​ Unlike past presidents who had lost, Adams would run for congress and would win in 1830. He would serve in that role until his death in 1848. 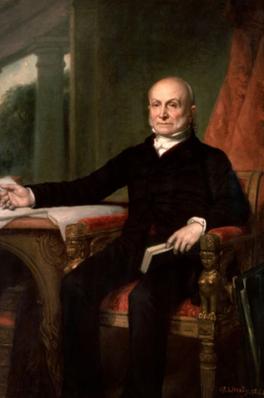