​​The top 5 things John Adams accomplished in his presidency

John Adams was the second president of the United States and also one of the founding fathers. He also had a big part in drafting the Declaration of Independence. Adams carried on the idea of civic virtue that was started while he was vice president to George Washington. His leadership helped calm tensions with the government of France at the turn of the 19th century.

Adams was raised in modest but comfortable surrounding in Braintree, MA. He would go on to attend Harvard College where he would receive a Bachelors of Arts. This would lead him to start his professional career as a teacher.

By 1758, Adams career shifted to law, and his engagement in public policy was on the rise. In 1763 he had published various essays under a pseudonym to help present an anonymous point of view on subjects of the day. His first real foray into politics came in 1765 when he publicly opposed the Stamp Act of 1765.

As the new colonies began to demand their freedom, Adams public profile grew with it. In 1774 Massachusetts sent Adams as their representative for the first Continental Congress. As the Congress evolved, it was clear that independence for the colonies was on the horizon.

In 1776 Adams would work with Thomas Jefferson and other founding fathers as the new nation took form. It was his guidance and ideas that helped start a revolution. While many wanted Adams to write the Declaration of Independence, he persuaded Jefferson to draft the document by himself since he was a better writer.

During the Revolutionary War Adams would play a key role in building trade and gaining support from other nations. As Commissioner to France, he would help build ties that would help strengthen the war efforts. His diplomacy is looked at as one of the reasons the United States was successful in defeating Britain. He would continue to build relationships with other nations after the war was over.

In 1789, Adams would become the first Vice President of the United States after George Washington beat him in the nation's first presidential election. During his time as vice president, Adams role in the government was minimal. Washington was a strong leader, and it seemed that Adams was waiting for his turn to lead the country.

Adams would win the election of 1796 by a small margin over Jefferson, who would then become his vice president. During his time as president, he would continue much of the work that Washington had done. He would also have to make key decisions on America's role in foreign conflicts. His most notable accomplishment was to sign the Alien and Sedition Act into law in 1798.

In 1800, Adams would lose the election rematch to Jefferson by a slim margin. At this point in his life, Adams had resigned himself to retirement from public service. He would later on publish letters that would defend his legacy as president. Despite their political battles, Adams would reconcile his relationship with Jefferson. Ironically, both Adams and Jefferson would pass away on July 4, 1826, which was also the fiftieth anniversary of the Declaration of Independence. 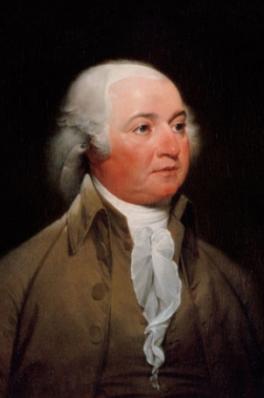