James Madison papers at the Library of Congress

​James Madison was the fourth U.S. president and was also known as "the father of the constitution". During his time in office he led the country through the War of 1812. He was able to use his experience to help steer the nation through one of it's first international conflicts. Domestically, Madison worked with congress to stabilize the banking and tax system.

James Madison is most well known for his immense hard work on the United States Constitution and the Bill of Rights. He is also famous for being president during the War of 1812.

James grew up in a small farmhouse on a tobacco farm in the Colony of Virginia. His family would have been huge as he had eleven brothers and sisters but unfortunately several of them died at a very young age. James was more of a homebody and liked to stay indoors and read.

James was very intelligent and performed well in school. He then attended the College of New Jersey - today it is known as Princeton University. He graduated in two years and learned many different languages as well. He also studied law.

After completing college, James entered politics and within a span of few years had become the member of the Virginia legislature. In 1780, Madison had become an influential member of the Continental Congress and worked hard to keep all the states united against the British superpower.

When Revolutionary War got over, Madison occupied the lead role at the Philadelphia Convention. The original reason behind the convention was headed towards updating the Articles of Confederation. However, Madison took charge and turned into developing a full constitution and creating the US federal government.

The idea was to make a federal government which was relatively new to some states and so many people were confused if they really wanted to join the United States. Therefore, to support his initiative, Madison wrote many essays called the Federalist Papers to help convince states to understand the Constitution and join the United States.

James Madison served full four terms in the United States Congress. During that time he also helped in passing the Bill of Rights into law that was to protect the basic rights of US citizens. Later on, he became the Secretary of State for his close friend Thomas Jefferson.

War of 1812 came out to be the biggest event under his presidency. Madison was not willing to participate in the war but Britain was seizing US trade ships. Finally, Madison felt that he was left with no choice and he declared war on Britain. Due to US weak position at that time, it lost many battles including the incident where British marched the streets of Washington DC and burned down the White House. However, by the end of the war, US won the Battle of Orleans which was the final battle and raised Madison's bar of popularity.

Madison died a natural death at the age of 85 as his health deteriorated over time.

1. He was the last person alive who had signed the US Constitution.

3. George Washington and James Madison were the only two presidents who signed the constitution.

4. Both of his vice presidents died in office.

5. He never stepped out of the circle of politics and held any job outside politics.

6. Madison was related to both George Washington and Zachary Taylor.
​ 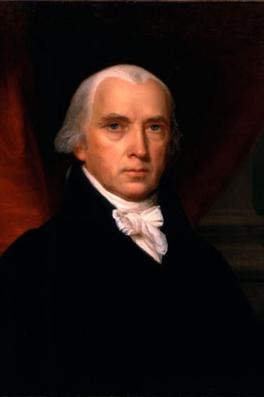