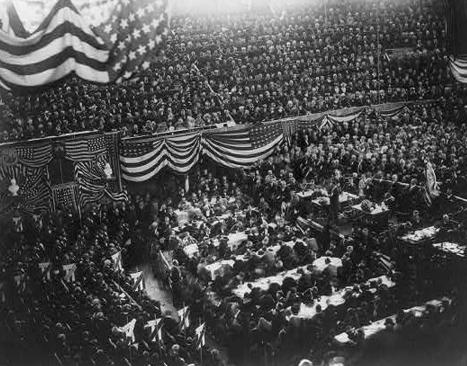 ​Many know that James Garfield met an untimely death within the first year of his presidency, but history has forgotten the contested convention that elected him to represent his party. In 1880, Garfield fully supported fellow Ohioan John Sherman in his bid for the White House, but a fractured party created chaos at the party convention in Chicago. Among the candidates to split the votes were former president Ulysses S. Grant and James G. Blaine, a Senator from Maine. With party factions at odds, Garfield was drafted to represent his party and eventually would win the presidency.

The buildup to the convention

In 1880 there were early signs that the Republican party would have difficulty picking it’s representative for the presidential election. The stalwart faction of the party was behind Grant, the half-breed faction was behind Blaine and Sherman was backed by the remaining members of the party. With such a division of groups that would not back down, many feared that the convention would be trouble. As it turned out, the 1880 Republican Convention may have been the most contested in history.

At the request of Sherman, Garfield actually attended the convention to voice his support for the then Secretary of the Treasury. As most anticipated, none of the nominees had enough votes to win the nomination after the first ballot. Grant led with 304 votes, with Blaine having 284 and Sherman with 93. After an amazing 33 ballots support started to shift to a the dark horse candidate, James Garfield. While he was not seeking the nomination, he would accept the nomination with 399 votes on the 36th ballot.

Why Was The Convention Brokered

The main question that has come from the 1880 Republican Convention, is why was it contested? From most historical accounts, the majority of the party did not want Grant back in control of the party. He was viewed as a part of the past by this point and had suffered through many controversies during his time in the White House. The problem was that he still had support by a major faction of the party (the Stalwarts), who had wide control of the political system. When the rest of the party realized they would not beat Grant with Sherman, they nominated a respected Governor in Garfield. The move would ultimately bring the party together as Garfield gained the support of James G. Blaine and the remaining Grant opposers.

While Garfield was not seeking the presidency, he was a loyalist who took the nomination graciously and would win the general election against Winfield Scott Hancock. The reluctant candidate would slowly embrace the presidency and do his best to unite the party by naming Blaine to the role of Secretary of State. Despite his best efforts, there were still those who did not accept his presidency. This would lead to his assassination by an admitted Stalwart, Charles Guiteau. ​

How James Garfield Won The Republican Nomination In 1880