​​George Washington was the nations first and possibly most important President. After serving as the Commander of the Continental Army, Washington won the election of 1789 by a landslide. His leadership skills on the battlefield translated into a successful presidency as he led a brand new nation for eight years. To this date he remains one of the most popular presidents, who's mark on the country is celebrated in the form of his face on the one dollar bill.

Washington spent his entire adult life involved in military endeavors for the newly formed colonies and later during the fight for independence. His career started during the French and Indian War that spanned from 1754-1762. These early conflicts helped define the territories and protect the properties that would later be the United States. Washington also received his first major recognition as a general when he was named Commander of the Virginia Regiment, which was the first major military formed in the colonies.

It was his military foundation that led to Washington's major role in the American Revolution. In 1774 was named as a delegate to the first continental congress. By this time it was clear to Washington that there was a war with the British on the horizon. The young colonies would go on to win the Revolutionary War after hard fought Washington victories such as Valley Forge and Yorktown.

​In 1789 Washington was elected the first President of the United States by the electoral college. He was the first and only president elected unanimously. Many of the things that Washington did during his two terms set precedent for what future presidents would do in office. The Residence Act of 1790 that Washington signed designated the official location of the United States government. As a way of celebrating his contributions to the forming of the new nation, the territory was named the city of Washington in the District of Columbia. 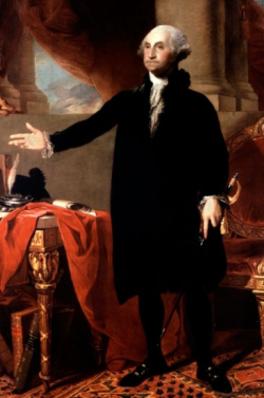