George W. Bush was the 43rd president and son of the 41st president George H.W. Bush. He guided the country after the terror attacks of September 11th, 2001 and started the War on Terrorism. During his time in office he was Commander in Chief over the invasions of Iraq and Afghanistan. Known as a compassionate conservative, Bush dedicated more time and money to AIDS relief in Africa than any other president in history.

Bush was born into a political family and was exposed to politics at an early age. His grandfather Prescott Bush was a U.S. Senator from the state of Connecticut from 1952 to 1963. His father George H. W. Bush served as the Director of the CIA, Vice President for Ronald Reagan and President of the United States from 1989 to 1993. Bush himself would help his father get elected president in 1988 by serving as a campaign adviser who worked with the media.

Outside of politics Bush would lead several private sector jobs before going into politics. His family had been in the oil business for many years, so it was no surprise that he led several oil exploration companies in the 1980's. In 1989 he became part owner of the Texas Rangers major league baseball team. He would lead the team for five years as a managing partner. His hands on approach of attending games in the crowd made him a fan favorite.

In 1994 Bush was part of a nationwide Republican party shift of power when he won his race for Governor of Texas. As governor, Bush pushed through the biggest tax cut in state history and used a budget surplus to grow the economy. In 1998 he won re-election and his popularity led to a calling for him to run for President of the United States.

In 2000, Bush would run and defeat Vice President Al Gore in the closely contested and drawn out presidential election. He branded himself as a compassionate conservative who would be different from past Republican party leaders. He would take office during a time of economic down turn that would test some of his ideals.

On September 11th, 2001 Bush would face a domestic crisis like no other in U.S. history when the country was attacked by terrorists. The attacks on the World Trade Center, Pentagon and a thwarted effort in Pennsylvania would mark the beginning of the War on Terror. Bush would quickly respond to the attack by ordering bombing missions to the mountains of Afghanistan where it was thought that the terrorist group Al-Qaeda was based.

In 2003 Bush would launch an invasion of Iraq as a part of the War on Terror. This approach was meant to face the "Axis of Evil" that Bush had defined as a group of nations that were out to cause the U.S. harm. With the U.S. now at war on two fronts Bush faced criticism domestically and from abroad. Despite the criticism Bush would continue the wars and begin to rebuild the nations with new governments.

In 2004 Bush would defeat Senator John Kerry and win a second term. His second term would be mostly filled by continuing the war efforts and trying to avoid economic crisis. In 2008, just as his presidency was  winding down, the economy fell into a deep recession. Bush would order a massive stimulus to help avoid a total collapse of the economy. Due to the wars and the poor economy, Bush would leave office with low approval ratings. These ratings have since improved due to charitable work he has done since leaving office. 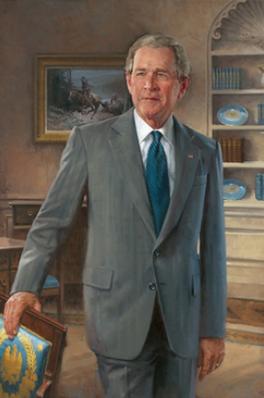