​The brilliant prudence of Dwight Eisenhower

Dwight Eisenhower was the 34th president, who served as a five star army general during WWII. His strong leadership during the war helped him gain the confidence of the American people and win the election in 1952. During his time in office he signed the popular Federal Aid Highway Act of 1956, which was the legislation that started the interstate highway system.

Eisenhower was born into a big family and grew up in the small Kansas town of Abilene. From an early age faith played a role in his family life, with his mother being very religious. Eisenhower was the third of six brothers in the family, so learning how to work with others and sharing responsibility were something that he learned at an early age. He enjoyed a normal childhood through his high school graduation in 1909.

In 1916 Eisenhower would marry Mamie Doud and they would have two sons. During this time period he continued his military career while being stationed in the the United States. When the United States entered WWI in 1917 he trained units in anticipation of being deployed. To his disappointment he remain stateside for the duration of the War. He would go on to serve in various military positions over the next two decades.

After Japan launched it’s sneak attack on Pearl Harbor, Eisenhower was brought to Washington, DC to help plan the response and overall war strategy. This is where his years of experience training troops and planning military operations came to the forefront. In 1942 he was named the Supreme Commander Allied Expeditionary Force. He would go on to be named Supreme Allied Commander of the Allied Expeditionary Force, which oversaw operations in Europe. In this role how would plan and launch the successful D-Day invasion on June 6, 1944.

After Germany surrendered and the United States won WWII, Eisenhower oversaw the post war rebuilding efforts in Germany. This task also helped him showcase more of his leadership skills. As a reward for his work, he was named Chief of Staff of the Army by President Truman. He would also go on to become the Supreme Commander of NATO and would help with the post war efforts in Europe.

In 1948 Eisenhower made it clear to the public that he did not want to run for political office. Most saw this as the end of the discussion, since he may be too old to run in future elections. That declaration did not last though, starting in 1951 the Republican party launched an effort to “Draft Eisenhower” as their candidate. After being convinced that it was his duty to lead the country, Eisenhower officially began his candidacy.

Running on a strong anti-communism message and the promise to end a growing conflict in Korea, Eisenhower brought together the Republican party, who had not been in the White House in 20 years. To make the ticket more appealing to traditional Republicans, he named Richard Nixon as his running mate. Nixon also helped balance out the ticket with his youthfulness compared to the then 62 year old.

In what was one of the biggest landslides ever, Eisenhower defeated Democrat Adlai Stevenson 442-89 in the electoral college. His campaign slogan of “I like Ike” was confirmed by the American people by winning 55% of the popular vote. This also showed that he had not lost much of his popularity from his leadership during the war. At this point his presidency looked to get started on a very good note.

During his first term Eisenhower continued many of the programs that were started in the “New Deal” and did many things that were considered progressive. By fully integrating the armed forces, he helped move forward racial equality. In what was his is most lasting achievement, he signed the Federal Aid Highway Act of 1956, which created the modern highway system in the United States.

Eisenhower would also face tough foreign policy decisions once taking office. In 1953 he was able to reach an armistice in Korea by not backing down on Chinese involvement. After the death of Russian leader Joseph Stalin, he also faced a growing nuclear threat and the beginning of the cold war. In both of these areas Eisenhower's steady hand helped de-escalate possible catastrophic events.

As the 1956 election approached, Eisenhower was not sure that he would serve another term. After being assured by the party and close confidants, he would once again face Democrat  Adlai Stevenson. This time he would expand upon his victory in 1952 by winning the electoral college 457-73 and 57% of the popular vote.

Throughout the rest of his presidency Eisenhower would continue to face many of the same challenges as his first term. Growing racial tensions in Arkansas led to Eisenhower take control of the Arkansas National Guard and use them to protect African American students as they made their way into school. He would also continue to fight against the growth of communism across the globe.

After his time in office Eisenhower would enjoy the rest of his life from his home in Pennsylvania that was close to the Gettysburg battlefield and his retirement home in Palm Desert, CA. Known for his love of golf and playing bridge, he would spend much more time during both in his later years. On March 28, 1969 Eisenhower would pass away from congestive heart failure. His body was laid to rest in his hometown of Abilene, KS on April 2, 1969 at what is now the Dwight D. Eisenhower Presidential Library. 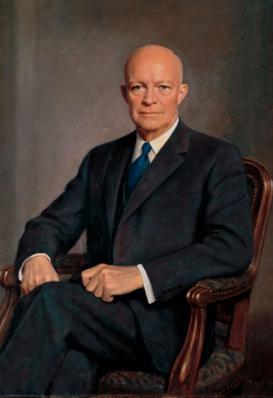