Chester Arthur was the 21st president and assumed office after the assassination of James Garfield. During his time in office he continued Garfield's agenda, which included naval reform and civil service reform. His term was clouded by many scandals and gilded age political behavior.

Prior to his time as vice president Arthur was deeply entrenched in New York politics and had a major influence of the policies of the day. Known as a "Stalwart", Arthur was a member of a republican faction led by Roscoe Conkling. His work in support of the spoils system was controversial and later led to reforms that he led during his presidency.

​After the shocking assassination of president Garfield Arthur changed many of his political stances to advance the work of the fallen leader. This led to the end of the Stalwart faction and reform at many levels of government. His work on the surplus and tariff reform were pivotal to the nation as it finally made economic changes from what had been in place prior to the civil war.​ 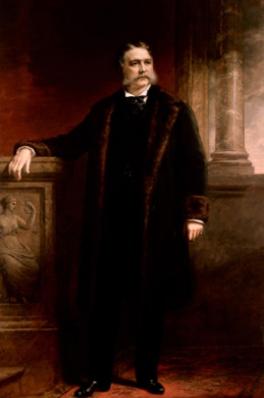