How Abraham Lincoln won re-election during the Civil War

Abraham Lincoln was the 16th president and led the nation during the Civil War. Before his time in office he served in the House of Representatives and as a lawyer in Illinois. He is best known for preserving the union through his decision making and great communication skills. His emancipation Proclamation declared the end of slavery.

Lincoln began his political career in 1846 when he was elected to congress as a member of the Whig party. During his two terms he backed most of the Whig agenda, which included support for early abolitionist policies. He would hold on to these beliefs even after leaving office to become a prairie lawyer. They would also shape his future decisions as president.

In 1849 Lincoln left the congress and returned to Illinois to pursue a career as a lawyer. This gave Lincoln a chance to provide for his family and it also allowed him to take part in public debates. Many of his cases involved development of land and other expansion issues. While he was a successful lawyer, Lincoln could not stay out of politics, and began speaking out in support of the abolitionist movement. This debate started his political comeback.

​The famous Lincoln-Douglas debates brought nationwide attention and helped launch Lincoln's presidential campaign years later. While Lincoln did not end up winning the Senate seat he solidified new supporters and gained respect from the Republican party. All of these elements led to Lincoln's presidential run and victory over Stephen Douglas in 1860.

As president, Lincoln faced a nation that was divided and on the verge of war. Even before Lincoln took office southern pro-slavery states began to secede from the union and prepare for conflict. On April 12, 1861 war began with the Confederate attack on Fort Sumter. Through out the bloody conflict, that killed over 600,000 Americans, Lincoln held steady to his anti-slavery policies and eventually wore down the Confederate army. While the cost of lost lives was high, Lincoln had preserved the Union.

After being re-elected in the election of 1864 Lincoln began to plan the reconstruction of the South and the return of Confederate states back into the Union. This was a long and tough process that would truly take years to accomplish. Unfortunately Lincoln would not see this process all the way through. While attending a play at Ford's Theater Lincoln was shot by actor and Confederate sympathizer John Wilkes Booth. Lincoln would pass away the next day, April 15, 1865. After his death, Lincoln's body would travel by train back to Springfield, IL where his was laid to rest. 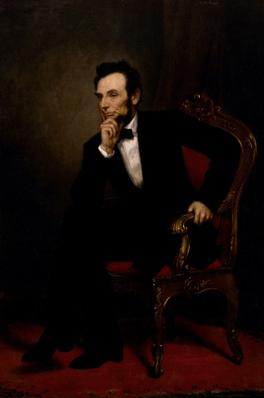